Mark S. Garland is a naturalist who has been sharing his enthusiasm for nature with others professionally for over 40 years.  He holds B.S. and M.S. degrees from the University of Maryland’s College of Agriculture  Work experience includes 6 years as a Ranger/Naturalist with the National Park Service, 17 years with the Audubon Naturalist Society (based in the Washington, DC area), and 4 years with New Jersey Audubon Society’s Cape May Bird Observatory.  He has also led tours for Smithsonian Journeys, Massachusetts Audubon Society, Riveredge Nature Center, and Betchart Expeditions.  He teaches week-long birding classes in Cape May for the Road Scholar program by Elderhostel each spring and fall, and he also teaches at the Hog Island Audubon Camp in Maine.  He continues to lead many field trips and workshops for both Audubon Naturalist Society and the New Jersey Audubon Society. From 1984 to 2001 and again from 2006 to 2016 he planned and operated the Nature Travel Program for the Audubon Naturalist Society.  He also organizes and leads many private tours.  Tours with openings are listed on this site. 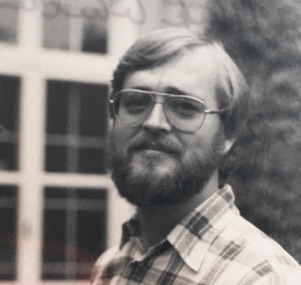 Mark in 1984 at the Woodend Sanctuary, headquarters for the Audubon Naturalist Society.

He is the author of the book Watching Nature: A Mid-Atlantic Natural History, published by the Smithsonian Press in 1997, and of the chapter Canal Walk in the Anthology City Birding, published by Stackpole Books in 2003.  He founded the Cape Charles, Virginia, Monarch butterfly research project in 1995, and in 2015 he became the Director of the Monarch Monitoring Project in Cape May, New Jersey.  He has co-authored 3 scientific papers on the Cape Charles monarch migration project.

Since early 2015 he has authored the “Birders Question Mark,” Q&A Column for Bird Watchers’ Digest.  For over 15 years he appeared regularly on the weekly radio program Metro Connection on Washington’s public radio station WAMU.  He has written regular columns for the Cape May Star and Wave, for birdcapemay.org, and for the Audubon Naturalist News; one of the latter pieces was awarded the Excellence in Mass Media Award by the American Association of University Women in 1995.  He is a frequent speaker at various events, ranging from nature and birding festivals to bird club monthly meetings.

Mark currently runs his own small company, Garland Cunningham LLC, which plans and conducts all the programs  he leads along with tours led by other naturalists.  Mark also plans and leads many private tours; gather 6 to 12 friends and request a custom itinerary.

In March of 2019 he was awarded the Paul Bartsch Award for Distinguished Contributions to Natural History from the Audubon Naturalist Society (right).  Video from the Award Ceremony may be seen here.  Video filmed and produced by Dr. Bennett Werner. 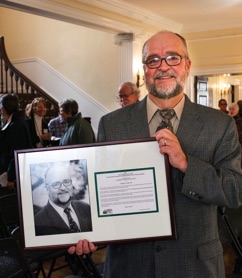 Mark receiving the Paul Bartsch Award in 2019 at the Woodend Sanctuary. 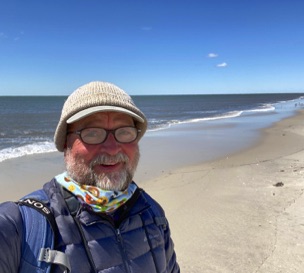